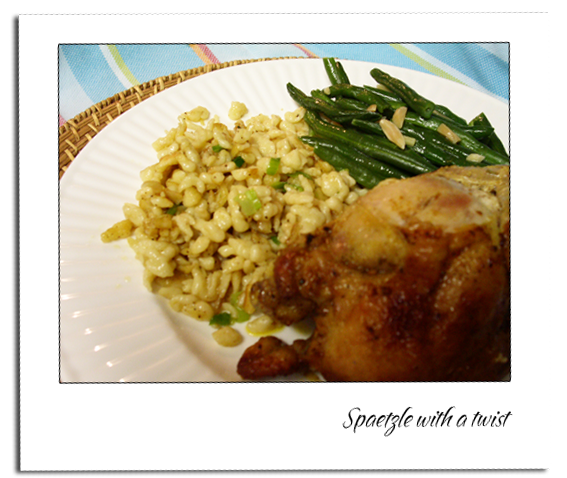 In Europe spaetzle is largely considered a “Swabian speciality” and is generally associated with the German states of Baden-Wuertttemberg and Bavaria. Before the invention and use of mechanical devices to make these noodles, they were shaped by hand or with a spoon and the results resembled Spatzen (meaning little sparrows, sparrow is Haus-Spatz or Sperling in German).

Spaetzle dough typically consists of few ingredients, principally eggs, flour, and salt. Often, water is added to produce a thinner dough. Traditionally, Spaetzle is made by scraping dough off a wooden chopping board (Spaetzlebrett) into boiling salt water where they cook until they rise to the surface. They are then skimmed and put aside. several devices were invented to facilitate cooking that resemble a strainer, (or colander), a potato ricer (“Spaetzlespresse”), a food mill or coarse grater (“Spaetzlehobel”). Like with scraped Spaetzle, the dough drops into the boiling water. Since I don’t own one of those devises I just used the regular colander and spatula.

Parmesan Baked Potato is to me a comfort food. But that’s with all potato 😉 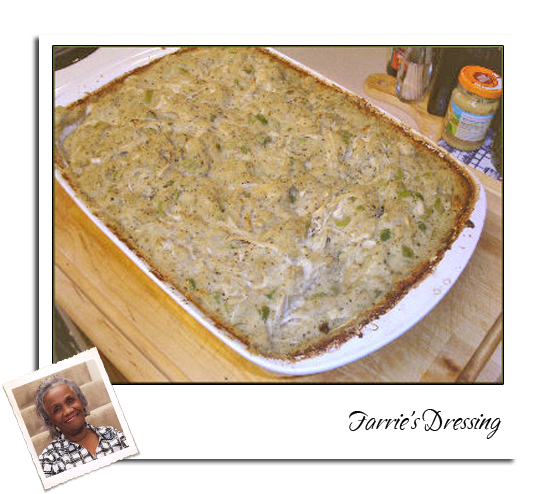 Living in the South means you will always have cornbread dressing at every holiday dinner. Of course you can make this dish any time you have a taste for dressing. The first time I had the pleasure of eating dressing was at my sister in law’s house. I got the general recipe from my Mother in law Farrie. When I would ask her how to make it, she would say: ” a lil of this and a lil of that” :). It took me some time to perfect it, to the way I make it today.